Skip to content
Have a Question?
< All Topics
Print

The goal of the check-in, is for the CAS to convey their state so that the FAC can plan accordingly.

In a normal situation, a FAC will be on station and on the frequency when the CAS arrives. The CAS is to take position at a holding point briefed ahead of their mission. This should be a point at least 25 miles from the target area.

When holding or enroute, the CAS can notify the FAC with a call. Depending on the situation, the FAC will request your check-in, or will hold off with a particular reason. When knowing the FAC is available, the CAS can also go for the “ready for check-in” call right away.

IMPORTANT: In the response of the check-in, the FAC will generally provide an ECHO point as response. Before calling ready, make sure you are also ready to enter, or note down the coordinates.

The aircraft check-in on the FAC frequency follows the mnemonic C(M)NPOPCA:
Mission Nr. (omit if not applicable)
Number and Type of aircraft
Position and altitude
Ordnance (Type and amount incl. laser code)
Playtime (available time on station)
Capabilities (Special qualifications or equipment)
Abort code (default: “abort in the clear” which means that “abort, abort, abort” will be called)

The Check-In readback is not mandatory and should only be done for single items if the FAC deems it necessary to make sure he understood it right.
Example:

Keyholes are a way to designate an ad hoc CP (control point) or IP (ingress point) in relation to the target or POI (point of interest). The centre point of the Keyhole is referred to as Echo and is given as coordinates on the radio with the holding instructions. The other points are designated Alpha to Delta referring to the cardinal directions on a compass rose (North to West), further designated by distance. 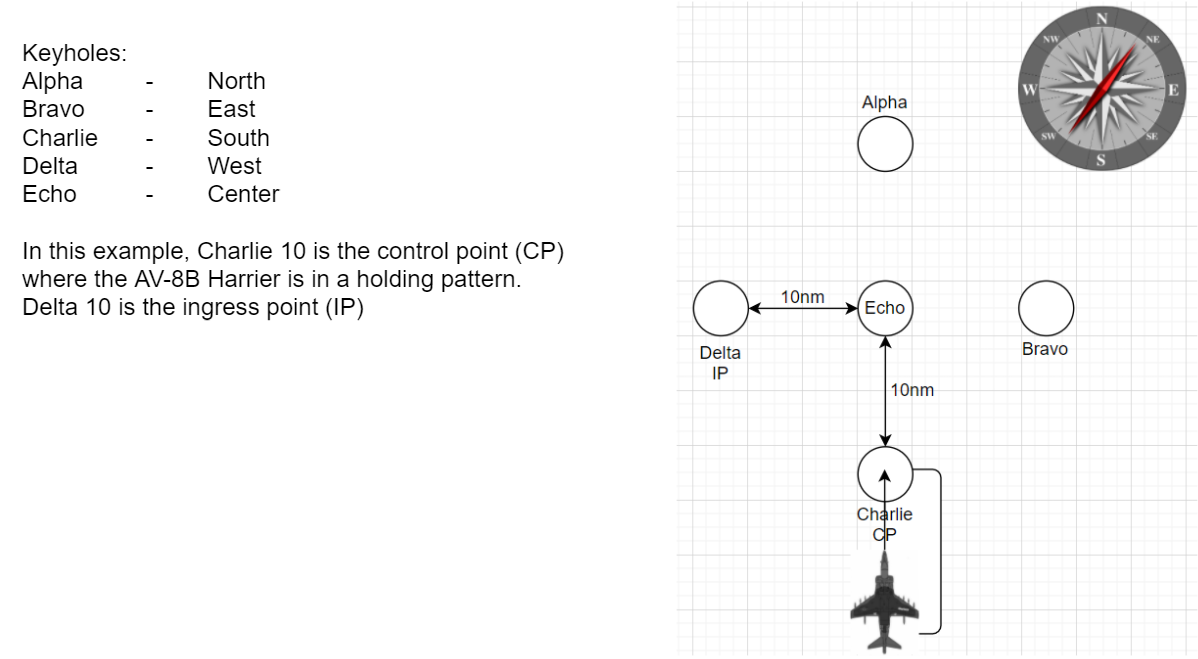 Thus, the order to “hold at Charlie 10” means the pilot should fly a holding 10nm SOUTH of the Echo point. When at the holding position / CP and altitude block, call established + angels or block. Hold in orbit, racetrack pattern perpendicular or parallel to the target as required.

As the picture suggests, make sure that in the holding pattern you are never closer to the ECHO point than the holding distance.

Heartless 52, this is Rumble 31, on-call-CAS, ready for check-in